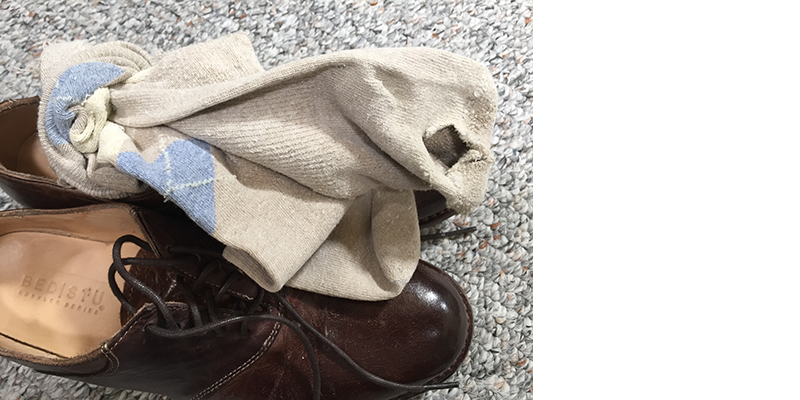 FORT LAUDERDALE, FL – Dogs and cats do it, birds and fish, certainly humans do it: travel extraordinary distances persevering seemingly insurmountable obstacles of pain, time and distance to reunite with a loved one.

But a sock? The story of this unintentionally estranged pair of beige and blue Golden Toe argyles more than reinforces the axiom that love knows no bounds or species.

Stranded in that secret corner of a dryer cylinder, the sock made the remarkable roundtrip from rural Hayfork in Northern California to Fort Lauderdale, Florida, and back again. Their journey began within the erratic dryer’s trip to a local fix-it shop. Deemed irreparable, the dryer with the sock still stuck inside was dumped in a junkyard where the appliance was dismantled. The parted-out cylinder eventually made its way via eBay to a DYI repairman in the panhandle state who managed a roadside motel laundermat, where the faded and rank garment holed up for more than decade. Until the fateful day the rogue sock mingled with the underwear of a driver of an 18-wheeler. Hitching a ride cross country to a motel just outside of Hayfork — and against all matchmaking odds — the sock trekked the final miles home on foot.

According to the reunited partner, “My solemate is understandably a little worse for wear, but with a good washing and some TLC, it is on the mend.”