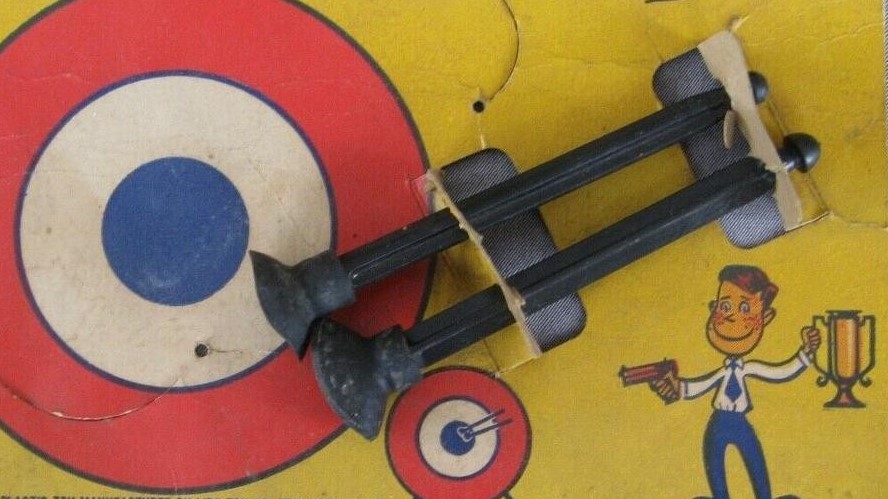 California becomes the country’s first state to authorize the new Driver Accountability and Safety Scheme. “Today the rubber meets the road,” Gov. Gavin Newson declared, as he playfully dotted the “i” in his name as if shooting a bullseye. “Game on!” cheered attendees of the signing ceremony.

“Moving forward there will be safety in numbers,” asserts the official news release, “as motorists will know to avoid or ‘give a wide berth’ to any vehicle with multiple darts affixed to its backside.”

The state’s Department of Motor Vehicles will proceed to issue each of the state’s 28 million licensed drivers a six-pack of custom hard-rubber darts and one high-powered targeting device or targetor. The accompanying “Rules of the Road” identify the types of infractions that legitimize a dart shot or “score.” Conversely, the rules admonish all motorists to “Watch Your Backside,” a message reinforced by the campaign’s ubiquitous roadside billboards.

With more than 15 million automobiles and 400,000 miles of roadways, the state’s highly anticipated success with the radical public-enforcement scheme will serve as a beacon of hope for other states.

The dart scheme’s implementation has been hotly contested for years. Unfounded fears of vigilante justice derailed early attempts at its passage. Overwhelmingly favorable results in foreign countries, however, eventually made the progressive approach too popular to ignore by U.S. road safety policymakers. Opposition to DASS from the auto insurance and body repair industries was shot down as attempts to further nefarious acts of price gouging and “collision collusion.”

DASS originated in England in 2017 where it experienced immediate positive results with road safety and calming. It helps, too, that right-side driving allows the vast majority of drivers to aim more accurately using their natural hand. Road darting has since been adopted with universal success by multiple European and Asian nations.

Rome, with its notoriously aggressive drivers, is the first municipality to experiment with “arming” pedestrians as well. Romans and tourists who’ve witnessed the jokey “If you don’t like my driving stay off the sidewalks” devolve into a legitimate threat enthusiastically support the city’s transportation ministry enacting the extreme measure.

DART RULES OF THE ROAD

AUTHORITY: The DMV is charged with regulating and enforcing DASS. CHP and local law enforcement officers will serve as road darting referees.

ALLOCATION: Six darts and one complementary targetor, which requires fingerprint ID to operate, will be issued annually in conjunction with vehicle registration. Drivers also be issued one single-use emergency exemption flag to alert others to stand down for good reason.

TRIGGER (UN)HAPPY: Officials determined the relatively sparse allotment of darts would promote judicious targeting. As a further deterrent to indiscriminate or vindictive gamesmanship, “buckshot” violators will have their road dart privileges suspended indefinitely.

ABUSERS: Single darted drivers may petition to perform community service in exchange for extraction. Multiple darted drivers will be ticketed and fined. Vehicles darted 10 or more times will be impounded for the duration of the season and the offending driver’s license will be suspended or permanently revoked.

PUBLIC SHAMING: The state-issued, individually coded rubber darts are tipped with a special adhesive that requires the DMV’s custom formulated solvent to safely remove. The penalty for unsanctioned dart removal is license revocation, severe fines and/or incarceration. It is also expressly prohibited to buy, sell, trade, gift or manufacture darts.

“For those keeping score,” Gov. Newsom, declared, “this is a win for road rangers and a comeuppance for road ragers.”

* Bonus: Check out this Gallagher comedy routine on stupid drivers, circa 1988.