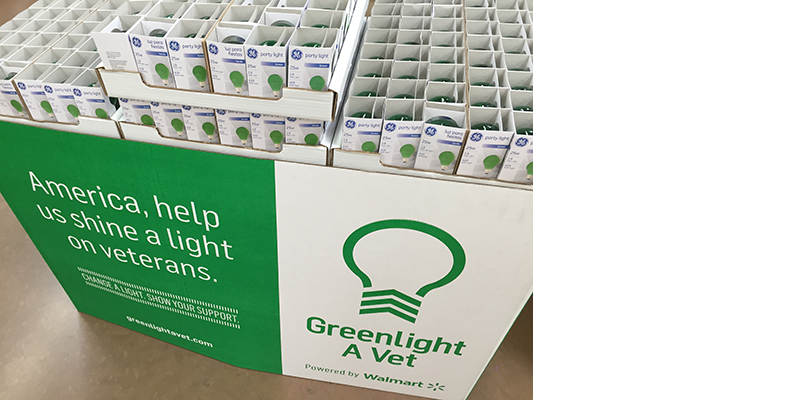 Unfortunately, Walmart’s Veterans Day initiative — “GreenLight A Vet” — appeared to be better than it was. The TV commercial in heavy rotation this November encouraged viewers, “Let’s shine a light on our veterans by changing one light to green, the color of hope and wellbeing and keep it glowing every day.”

However honorable the cause, the promotion’s intent was to have people visit Walmart and purchase a green light bulb. Cynicism aside, the scheme worked on me … until it didn’t. The weekend after the holiday, I went dutifully to the nearest Walmart. After searching up and down aisles and sections for 15 minutes I gave up and asked a clerk. “Oh, we sold out last week,” she replied, notably unapologetic. “But our nearby store should have plenty.” (As always in such situations, I was tempted to say, “Okay I’ll wait here while you go get me one.”)

OFF ON A TANGENT

But I did want to show my support for veterans. So I walked next door to Home Depot. While its lighting section was stocked with multiple colors of bulbs, there were none in the shelf space marked green. I eventually flagged down a salesperson who scanned the empty slot’s barcode and informed me that the nearby Home Depot “only four miles away” had 18-20 green bulbs. (“Great, I’ll wait here,” I wanted to say.)

Reluctantly, I took the bait and headed up the freeway. You might have already heard what happened next: when I screamed “dammit” at the sight of another empty “green” space. A nice salesperson who confessed that it wasn’t his area did stop to help me scour the inventory. This was in distinct contrast to the store’s lighting specialist named “C.J.,” who walked past us several times doing his best to ignore our frustration until he curtly declared, “We’re out!” Evidence that the only thing as hard to find at Home Depot as help is a green light bulb.

Fortunately, across the parking lot from Home Depot was a Batteries + Bulbs outlet, where I was pleased to find and buy a green light bulb. Mission accomplished. … Except, out of morbid curiosity I walked around the corner to the second Walmart that I was directed to earlier. At least I knew where to look this time; and sure enough there it was, prominently placed at the end of the light bulb aisle, an attractive “GreenLight A Vet” display — with hundreds of bulbs.

I can only conclude that each Home Depot and Walmart store is an island unto itself with no capacity to communicate with or support one another. Worse, in the case of Walmart, apparently store managers possess neither the commitment nor skills to implement what should have been a noble public-interest initiative.

THE MEASURE OF SUCCESS

This debacle underscores the irony in distinguishing between a successful public relations initiative and a highly visible advertising campaign. The immediate and easily quantifiable goal of advertising is to drive traffic to stores, which in my case the Walmart ad did, twice. However, with respect to the difficult to measure public relations goal of developing sustainable relationships with customers, Walmart clearly failed miserably with me and I suspect many other disgruntled green light bulb seekers.