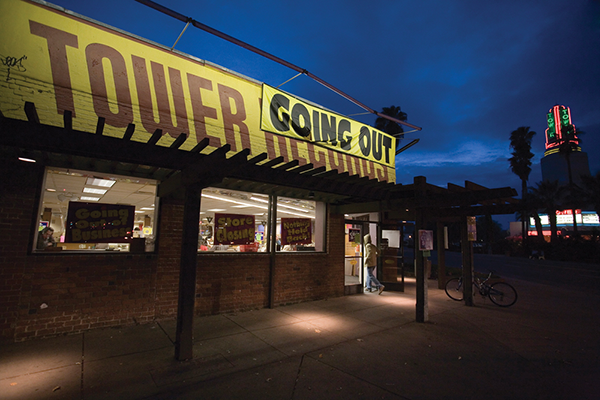 The memories conjured by recent death of Russ Solomon, the founder of Tower Records, were those of disappointment and despair. Not for Solomon, RIP, but for the failure of his stores. This includes the first one on the corner of Broadway and Land Park Drive in Sacramento, where I shopped obsessively for CDs as an adult. Also, the Watt Avenue store, the last to close when his corporation filed for bankruptcy, where as a youngster I spent hours in listening booths, and bought the occasional vinyl album or cassette tape, when I could afford to.

I don’t know that anything could have saved Tower Records from the competition of digital downloads and Amazon. I am bitter, though, that this pied piper didn’t make more of an effort to innovate, to strengthen brand loyalty, to make brick-and-mortar shopping more of a distinct experience, to embrace the digital age, to leverage the music revolution, rather than surrender to the company’s debt (estimated at more than $300 million at one point.)

The Sacramento Bee story (3-6-18) on the music pioneer’s death quoted his 2000 observation that the internet “is certainly never going to take the place of stores.” He also admitted in retrospect that the digital downloading phenomenon spread faster than he imagined. Such a lack of vision seems extraordinary for the entrepreneur who made Tower Records into a $1-billion-a-year worldwide endeavor and himself into one of the richest Americans in the 1990s (when Forbes pegged his personal worth at $310 million.).

While music lovers across the globe, and especially in his hometown of Sacramento, mourn the loss of Solomon, I remain as grateful for the memories of Tower as I am bitter that its swan song was so off-key.