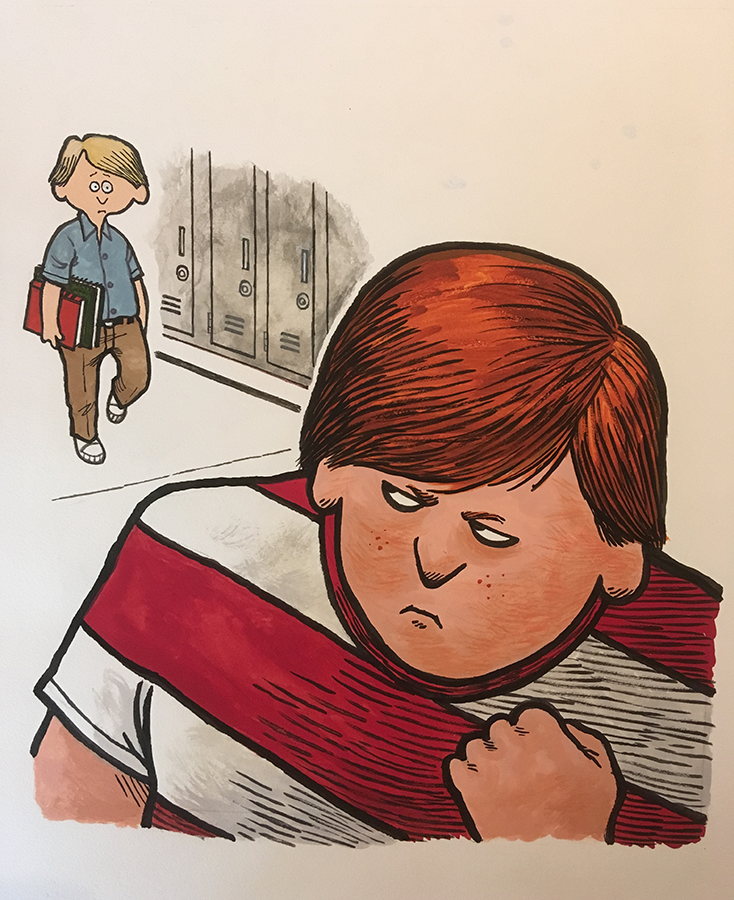 It never ceases to amaze me how often a handful of painful decades-old childhood memories come to mind. And the bully wallop they still possess. Being a short, four-eyed Jew were my vulnerabilities. Without a doubt, others endured much worse, but the verbal teasing and taunting and the occasional anti-Semitic slurs and exclusions were enough to do damage to my confidence and fragile psyche. The weird thing is way back then I’m sure I had no clue the hurt would stick with me through adulthood.

In other words, “bounces off me and sticks on you” is as wrong in theory as it would have been to invoke in actual practice. Whenever the vivid memories resurface, it pains me to think that any kid should ever be subjected hurtful words and actions. In my case and I suspect for the majority of victims, the consequences of childish name-calling and bullying behavior — the recurring bad memories, at least, and the emotional scars — survive far beyond the actual incident.

Sadly, in spite of a number of public-service campaigns through the years to help stop bullying and build character, the bad behavior persists. In fact, some studies suggest it is getting worse; due in part to the example being set by President Trump’s immature, reprehensible behavior.

[ARCHIVE REPRINT — 10-9-18] Research on adolescent aggression shows that when schoolyard bullies’ behavior goes unchecked, they are almost certain to continue their aggressive behavior. And not just throughout their schooldays, but through adolescence and into adulthood.

Discrimination is deplorable in any form. One of the most underrated ways, though, may be one of the most prolific. Physical appearance comes with obvious advantages as well as less apparent disadvantages.

[ARCHIVE REPRINT — 12-18-18] What could possibly be the most underrated ism? It is not what you think. It is how you look, how you appear to others.

This is about ugliness, as defined by immature, superficial individuals … which includes most of us, whether we admit or not.

Clearly, beauty bias pales by comparison to racism, sexism, ageism, ableism and other forms of discriminatory, oppressive and abusive behavior. Yet, because it is subjective and easy to mask, discrimination based on physical appearance persists nearly unabated, with impunity.

UGLY IS … AS TRUMP DOES

President Trump is a bully. I think even his loyal followers would agree with that assessment. And probably most even condone his behavior, some proudly, others passively. That’s politics, his supporters argue. And it works: It got him elected and helps sustain his party popularity.

So what? Well, there are two relevant and related bodies of research that should raise serious concerns about bullying, generally, and Trump’s, specifically. One bell sadly cannot be unrung, the other should be sounding alarms.

ALARM BELL #1: “Confident. Incorrigible. Bully. Little Donny was a lot like candidate Donald Trump,” read one headline (6-22-16) from a series of profile pieces on his youth in the Washington Post. Not surprised? President Trump consistently reflects the childlike aggression and arrogance of an entitled “born on third but claims he hit a triple” schoolyard bully.

It should also come as little surprise that multiple longitudinal studies have revealed that children whose bullying behavior goes unchecked are five times more likely to become “lifelong losers” — involved in anti-social behavior, domestic violence and other criminal activity.

ALARM BELL #2: Since Trump became president, “his inflammatory language — often condemned as racist and xenophobic — has seeped into schools across America,” recent Washington Post research uncovered. Young kids are mimicking the president’s rhetoric and cruel insults to bully classmates. As one victim put it, “They think it’s okay. The president says it … Why can’t they?”

Shortly after the 2016 presidential election, teachers across the country began reporting increased name-calling and bullying in their classrooms. More precisely, the 2017 Cornell University study found higher rates of bullying in areas of the country where voters favored Trump.

While the researchers do not conclude Trump’s election caused the increase in bullying, the correlation is difficult to discount. As Dorothy Espelage, a University of Florida psychology professor interviewed by NPR, observed, “You don’t have to be a psychologist or sociologist to understand that if these conversations are happening on the TV and at the dinner table that these kids will take this perspective and they’re going to play out in the schools.”

As deplorable as it is to witness adults engage in and mimic anti-social behavior, it should come as no surprise knowing the evolution of bullying. More disconcerting, though, is the lack of attention this problem receives. Despite the First Lady’s (unintentionally ironic) “Be Best” anti-bullying campaign.

“Just 14 percent of 9- to 11-year olds believe that the country’s leaders model how to treat others with kindness,” a national survey showed, “and 70 percent said it would help kids their age to be kinder if adults in charge of the country set a better example.”