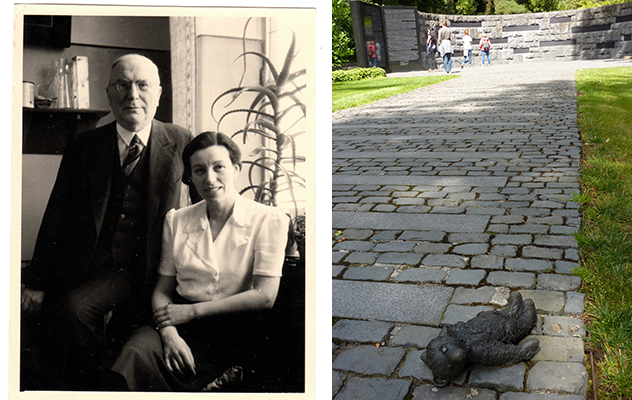 Dearest Herta and Lore! We see each other no more. I wish you both all the best. Think of me with love, as I do of you. Final greetings, kisses to you both. I end.

On display at the Foundation Memorial to the Murdered Jews of Europe in Berlin is this heart-wrenching death note of 65-year-old Richard Oschinski to his wife and daughter, dated 9 August 1942. That day he killed himself in his Berlin apartment. As reported in the Memorial’s archived materials, his wife and daughter had fled earlier to Great Britain. Of the 160,000 Jews who lived in Berlin at the beginning of 1933, 90,000 emigrated, 55,000 were murdered and 7,000 committed suicide. Only 8,000 lived to be liberated in the spring of 1945.

Sarah Friedrich of the Foundation Memorial staff provided the above portrait of Richard and Herta Oschinski from 1939, just days before Herta left for England. (Thank you Becca and Scott, for bringing this story to my attention.)

MORE PRECIOUS WORDS TO LIVE BY

More words for thought, especially during these turbulent times, from a wall plaque at the Oregon Holocaust Memorial in Portland’s Washington Park: