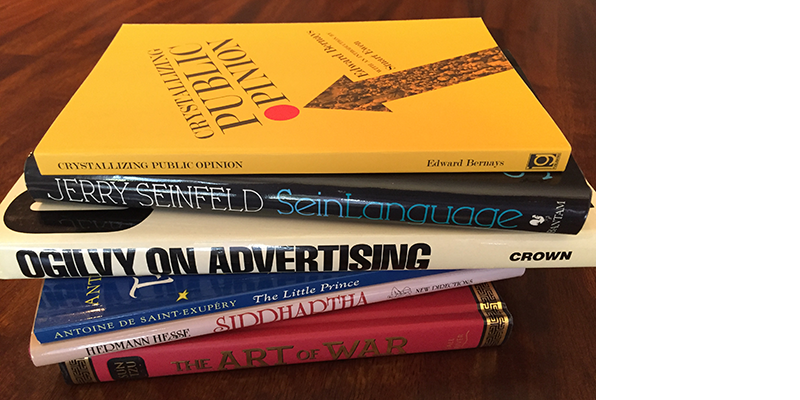 They’re strategically placed within easy reach — an eclectic collection of books I refer to often when considering human nature and public opinion … and how to influence it.

Alongside the historical treatise The Art of War by Sun Tzu, there’s the enlightening novellas Siddhartha by Herman Hesse and The Little Prince by Antoine de Saint-Exupery, as well as David Ogilvy’s creative bible Ogilvy on Advertising, not just for laughs SeinLanguage by Jerry Seinfeld, and most accessible Crystallizing Public Opinion by Edward L. Bernays.

Each of these classic works speaks volumes; and for my convenience I confess to have tarnished their pages by folding corners and yellow highlighting countless sections. None more so than Bernays’ seminal text on public relations, which remains as referential and insightful today as when first published in 1923.

Written down more than 90 years ago by Bernays (1891-1995), considered the founder of contemporary public relations, his profound and prescient words of wisdom accurately portray the nature of today’s policymakers and those of us (public, media, supporters and detractors) whose views and lives they intend to influence. Consider the current relevance of observations:

ON PERCEPTION: “The only difference between ‘propaganda’ and ‘education,’ really, is in the point of view. The advocacy of what we believe in is education. The advocacy of what we don’t believe in is propaganda. Each of these nouns carries with it social and moral implications. Education is valuable, commendable, enlightening, instructive. Propaganda is insidious, dishonest, underhand, misleading.” Bernays concluded, apparent then as now, was that truth is rather more relative in Washington than anywhere else.

ON JUDGMENTS: “… persons who have little knowledge of a subject almost invariably form definite and positive judgments upon that subject.” … “It is axiomatic that men who know little are often intolerant of a point of view that is contrary to their own.” Bernays advised public relations counselors to examine the sources of established beliefs, and “either discredit the old authorities or create new authorities …”

ON OPINIONS AND HERD MENTALITY: “No idea or opinion is an isolated factor. It is surrounded and influenced by precedent, authority, habit and all of the other human motivations.” … “One of the psychological results of homogeneity is the fact physical loneliness is a real terror to the gregarious animal, and the association with the herd causes a feeling of security. In man this fear of loneliness creates a desire for identification with the herd in matters of opinion.”

ON ABSOLUTISM: “… the average citizen is the world’s most efficient sensor. His own mind is the greatest barrier between him and the facts. His own ‘logic-proof compartments,’ his own absolutism are the obstacles which prevent him from seeing in terms of experience and thought rather than in terms of group reaction.”

ON COURTING CHANGE: Though Bernays’ insights predated concerns about social media “echo chambers,” it is evident he attached great value to listening to, learning from and understanding both sides of opposing viewpoints. Effective communication is a two-way street. To modify established beliefs, “It is seldom effective to call names or to attempt to discredit the beliefs themselves,” he warned.

Rather, he compared the principles and practices of public relations to the legal system; and to law schools which teach students to cleverly and passionately reconstruct opposition arguments, to see the world as their opponents do.

“The activities of a public relations counsel,” Bernays wrote, “resemble those of an attorney, except that he practices in the court of public opinion instead of the court of law. … He interprets the client to the public and the public to the client. His yardsticks are those of the coincidence of private and public interest.”

ON TIMES LIKE THESE: These times of widening cultural and political divisions, of taking sides rather than seeking common ground, it could only improve things to also reconsider the inherent humanity embedded in The Art of War; the curiosity and wisdom discovered in Siddhartha and The Little Prince; the tasteful art of persuasion outlined by David Ogilvy; and humble ourselves with a little SeinLanguage.

Of course if attempting to modify public opinion seems too intimidating, you can adopt the approach of all new fathers, as observed by Jerry Seinfeld: “Once a man has children, for the rest of his life, his attitude is, ‘To hell with the world, I can make my own people … and create whoever I want.’”