THE SACBEE-ALL, END-ALL TO BIASED JOURNALISM 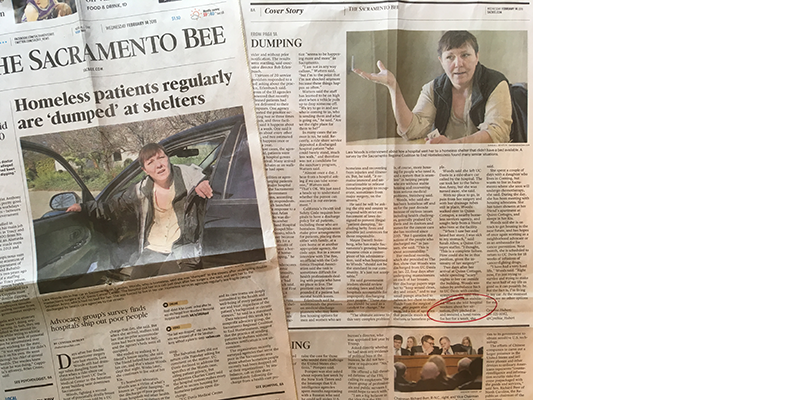 The Sacramento Bee’s treat for Valentine’s Day (2-14-18) readers was titled “Homeless patients regularly are ‘dumped’ at shelters.” The above-the-fold, front-page cover story featured an 8×6-inch color photograph of a seemingly bewildered woman in her car, Lara Woods, the subject of the piece. The story continued to fill the top-half of page 8 and included another color photo of a seemingly dismayed Woods. In total, the article covered more than 100 column-inches.

Bee staff writer Cynthia Hubert wrote that Woods had double mastectomy surgery at UC Davis. And that, according to Woods, upon her discharge she was told by the hospital’s social worker that a bed was awaiting her at the Salvation Army shelter, but that when she arrived the agency’s beds were occupied.

The story also told how Woods’s discharge papers included a list of agencies that provide meals and shelters to homeless people. “Woods said she left UC Davis in a ride-share car called by the hospital,” which took her to the shelter, which she claimed turned her away.

About the expose’s featured victim, Hubert, explained: “To homeless advocates, Woods was a victim of what’s known as ‘patient dumping,’ or the discharge of poor people from hospitals and other health care providers to shelters or the streets without advance planning.” The following paragraph noted that the Salvation Army did not return the writer’s calls and UC Davis Medical Center declined to comment on the situation. Consequently, for all readers know, “The ball was dropped,” at least according to Lara Woods.

The article, which noted Woods “has been homeless off and on for the past decade” and “generally praised UC Davis and its doctors and nurses,” also quoted Woods, “But I question the actions of the people who discharged me. This is about accountability.”

The article also quoted Sarah Allen, a staffer at Quinn Cottages, a homeless agency that ultimately took Woods in: “When I saw her and heard her story, I was sick to my stomach. I thought, this is a complete failure.”

Toward the end of the article, readers are informed that several days after her surgery Woods was readmitted to UC Davis with cardiac symptoms.

Later still — after the Bee and Hubert (a 2014 Pulitzer-prize nominee for a probe into “homeless dumping” in Las Vegas) indiscriminately ridiculed UC Davis Medical Center, relying mostly on unsubstantiated personal accounts — those readers who fought off social-issue fatigue to reach the end of the sensational article, get treated to the real, unbiased human-interest story.

From one inconspicuous sentence in the middle of the 30th of 34 paragraphs, readers learned this about UC Davis and Woods’ plight: “When she told hospital workers about her situation, they pitched in and secured a hotel room for her for a week.”

That is what’s called “burying the lead.”