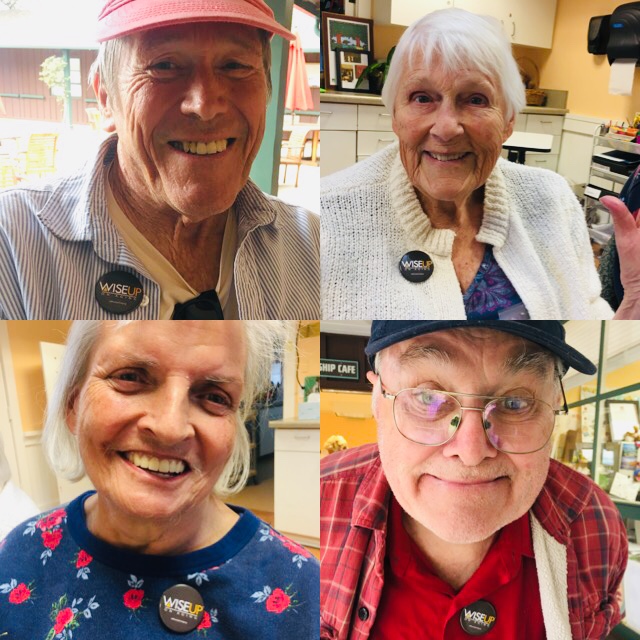 By Stuart Greenbaum and Kathryn Cherkas

What happens when two-dozen adult day center participants, ages 68-98, come together to critique a feature film — “The Best Exotic Marigold Hotel,” for instance?

Well … a handful walked out mid-screening, some fell asleep and a core group of 10 thoroughly embraced the opportunity to critique how accurately the storyline and characters portray older adults and the aging experience.

On May 6, 2019, the Friendship Center for adult day services in Santa Barbara, California, hosted the “Hollywood” themed event in support of Wise Up On Aging, a statewide initiative, sponsored by the California Commission on Aging, to encourage entertainment industry content developers to more authentically represent older adults on film and TV.

The older age reviewers at the Friendship Center had plenty to say, mostly good and certainly all pertinent relevant considering the film’s content and likely intended viewership demographic. The Wise Up On Aging Initiative intends to share the results with the filmmakers and further, use the event as a model other older adult centers and living communities to replicate.

“The Best Exotic Marigold Hotel,” a Golden Globe winning feature released in 2011, follows a group of British retirees who travel to India to take up residence in the Marigold Hotel, which is advertised as newly restored and luxurious. It turns out to be neither. The group is forced to cope with practical and cultural challenges as the hotel slowly reveals it charm in unexpected ways.

According to Friendship Center’s older adult critics, stated mostly in their own words, the film’s realistic content includes:

Less realistic or relatable content, observed by the critics, include:

The group found some things particularly offensive, such as:

As for the critics favorite scenes, they include:

The critics’ group discussion at the conclusion of the film produced unique insights both about the film and life in general for older adults. Granted, 10 people does not make a representative sample of a viewing audience. They likely do, however, offer some unintentionally overlooked perspectives.

Though “The Best Exotic Marigold Hotel” was entertaining, the critics all agreed, it was unrealistic in its portrayal of the lives of older adults. To pick up and move to another country, let alone an impoverished one, was “too fantastic.” Older adults are tied to medical teams, let alone families, limited incomes (social security and pensions) and other obligations that require “us to live somewhere ‘easy.’”

Younger viewers and probably the filmmakers themselves may think such a fanciful, exotic adventure is healthy and preferable, and “there’s no argument there,” according to the Friendship Center group, but the vast majority of older adults would be unable to make such a dramatic lifestyle change. This is not because older adults are “boring,” rather the realities of life prohibit the option.

With all due respect, Hollywood’s filmmakers would be wise to take these notes as they seek to entertain,  accommodate and monetize the increasing older adult demographic.

Stuart Greenbaum is director of the Wise Up On Aging Initiative to improve the representation of older adults on film and TV. He is also a Governor’s appointee to the California Commission on Aging.

Kathryn Cherkas, MPH, is program manager at the Friendship Center for adult day services in Santa Barbara, California. She has a master’s degree in public health focusing on aging and caregiving.