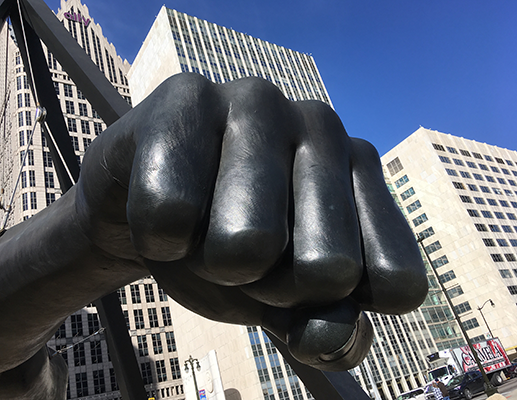 Joe Louis almost single-handedly punched a hole in Hitler’s theory of the “superiority” of the Aryan race. As a record 70 million radio listeners tuned in, the African American boxer defeated the German Max Schmeling in 1938, set against the backdrop of the Nazi regime’s hatred-spewing, “racially perfect” propaganda campaign. Louis became an overnight national hero and the pride of his hometown Detroit.

Born on Detroit’s east side, Louis reigned as heavyweight champion of the world from 1937-1950. He died in 1981. Near the 50th anniversary of the fight heard around the world, Detroit erected a monument to commemorate the achievement and Joe Louis.

“The fist,” as Detroiters refer to it, was commissioned in 1986 by Time Inc.’s Sports Illustrated magazine. The unique and interpretational monument was sculpted by Robert Graham of Venice, California. The artist explained years later, “People bring their own experience to the sculpture. I wanted to leave the image open, allowing it to become a symbol rather than make it specific.”

The 24-foot long bronze arm and fist weighs 8,000 pounds and is supported by a pyramid of metal poles. The installation is prominently located at the intersection of Jefferson Avenue and Woodward in downtown Detroit. There is no plaque, only a discreet tribute to Joe Louis inscribed on the arm.

The public art display commemorates the immense moral victory of good over evil, traditionalists mostly agree. Others, however, see the piece as everything from the embodiment of racial politics, the tireless fight for equality, conflict and violence, city pride and determination, and edginess and creative energy.

“It’s going to keep getting used by people for cultural projection purposes … politicized, racialized and commodified,” explained Victoria Gallagher, co-author of “Sparring with Public Memory.” However the fist is appropriated and re-appropriated, the great Joe Louis will always represent Detroit, power and freedom with distinction.