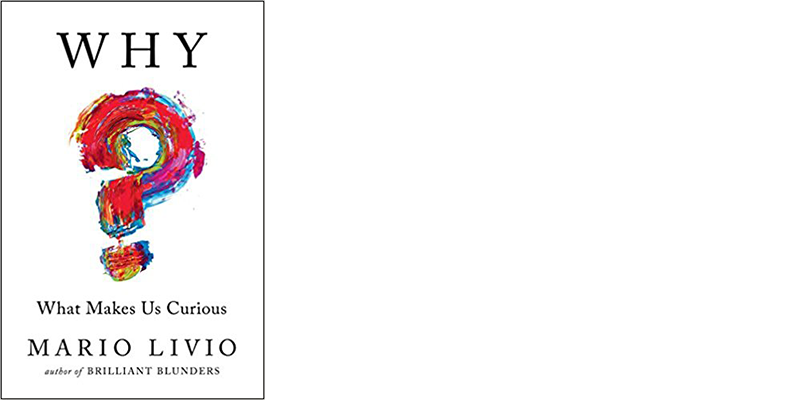 Do you ever wonder? Are you ever curious, about much of anything? Like, for instance, the origins of curiosity? Then you arguably either have too much spare time or I suppose just enough like me to read the new book, Why?: What Makes Us Curious by Mario Livio.

In this curious text, astrophysicist and author Livio examines humans’ quest for new and more information, mostly through the experiences of two renowned thinkers, inventor/painter Leonardo da Vinci and physicist Richard Feynman. Everyone knows the many wonderful accomplishments of the ultimate Renaissance man da Vinci. Feynman, who is equally inspiring for his boundless curiosity and often humorous musings, famously noted “Everything is interesting if you go into it deeply enough.”

The book also delves into the history of curiosity, reminding us that what should be a virtue was once seen as a vice (remember Eve?) and considered a dangerous pursuit with sometimes mortal consequences. Historically, the suppression of curiosity – through censorship or a version of fake news – has been used to subjugate others. Sound familiar? It should, history has a way of repeating itself. For better, history also has proved curiosity ignites the engines of revolutions in thought and science.

The author suggests a few ideas to foster and sustain curiosity, this though is not the book’s strong part. “… they’re just short-lived distractions. Genuine curiosity sustains itself,” reviewer Matt McCarthy wrote in USA Today (7-18-17). “There’s nothing contrived about it.”

At a time when narcissism has become a social norm, when talkers and know-it-alls far outnumber listeners and questioners, any nod to the virtues of being curious thankfully begs the question, Why?