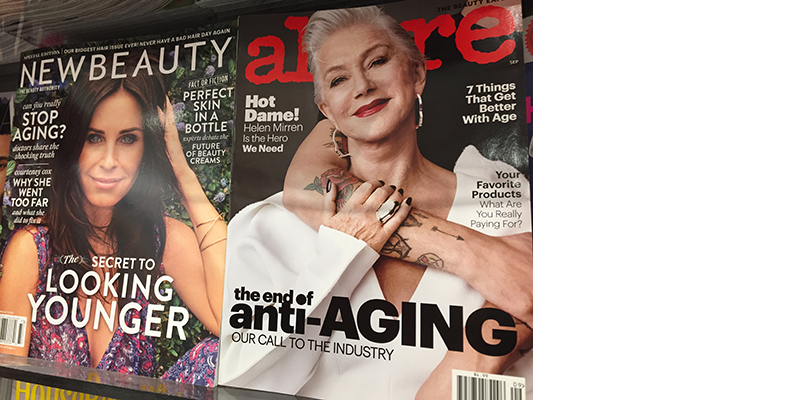 What the heck is “natural” beauty? Look younger, restore, rejuvenate, defy aging, the youth-movement marketers encourage. Ignore that shaming nonsense and embrace who you are, urges the proud counter-insurgence.

Try as women might to maintain their objectivity, it’s a challenge, particularly when targeted by the constant barrage of TV commercials and magazine covers featuring the most popular, attractive and youthful celebrities and supermodels.

The distorted picture may be getting some real clarity, though, with an emerging trend to put an end to mixed mess-ages.

Allure has taken a remarkably fashionable stance on behalf of women. The magazine announced in its September 2017 edition that it seeks the “end of anti-aging” with “our call to the industry.” (The cover story feature “Hot Dame!” is the subject of the Humble Sky post for September 5, titled “Helen Mirren Shines as Hollywood’s Ageless Badass.”)

“We are making a resolution to stop using the term ‘anti-aging,’” Allure editor in chief Michelle Lee, notifies readers in her Letter from the Editor title “The End of Anti-aging.” Adding, “If there’s one inevitability in life, it’s that we’re getting older.”

Lee challenges the beauty industry to stop “subtly reinforcing the message that aging is a condition we need to battle …” Though she admits, “We know it’s not easy to change packaging and marketing overnight.” (As if intended to prove this point, the Clarins advertisement immediately opposite Allure’s table of contents boasts, “Our most powerful age control concentrate ever.”)

By contrast, the Summer-Fall 2017 edition of New Beauty displayed alongside Allure and dozens of other women’s magazine, offers a more typical message about aging. Among the magazine’s dizzying array of cover captions, there’s “(The) Secret to Looking Younger” and “can you really Stop Aging? doctors share the shocking truth.” Regarding the “truth,” the magazine featured a 62-page promotional section … on plastic surgeons, dermatologist and cosmetic dentists.

Call it persuasion, fakery or bald-faced lies, anything or anyone that promotes “anti-aging” is guilty of fraud. Credit to Allure for literally taking a stand against ageism.