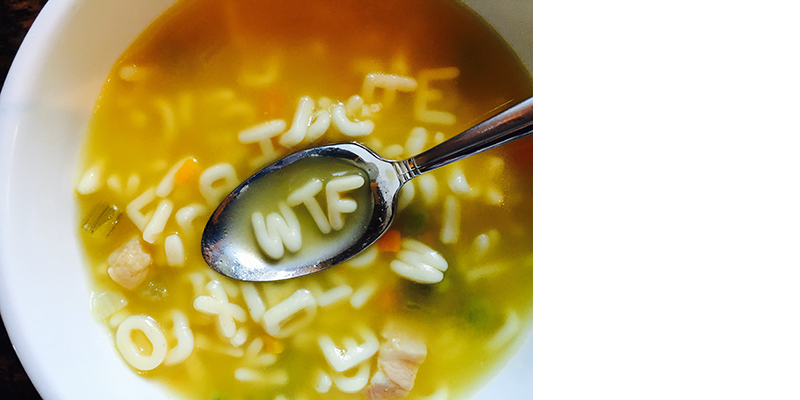 Warning: A communicable disease is infecting the English language and obscuring our thinking. Described alternately as initialisms or acronyms or simply abbreviations, the rampant overuse of this mumble jumble — letters masquerading as words — has reached critical mass. Barely decades-old, the convenient form of personal shorthand has literally evolved into a public nuisance.

Not surprisingly, the contributing factors to this alphabet soup are constantly misrepresented.

Our rapidly growing obsession with the use of abbreviations is confusing, remiss, annoying and pretentious. In short, we’ve spawned a contagion of CRAP.

The tipping point should be when professions rely so liberally on abbreviations that reports and articles must include glossaries to decipher the hodgepodge. In the field of aging there’s the national AARP, ACHCA, ACHE, ACL, ADA, ADL, AHCA, ASA, AoA, ASA and that’s just the start of the alphabet. At the state level it becomes even more confounding with so many initialisms front-loaded with the first letter of the state.

Antidotes to this disorder have surfaced; for some not soon enough. For example, the California Association of Health Facilities brands itself as “CAHF.” Fine, perhaps, if the organization represented farmers or the meat industry, but not skilled nursing facilities? Another state organization, the California Association of Homes and Services for the Aging (CAHSA) bit the bullet and changed its name in 2006 to Aging Services of California (now more cleverly known as LeadingAge California). The rebranding successfully separated it from the awkward circumstance of no less than three other similarly named state associations using an acronym pronounced as “casa.”

AARP presents a humorous take on the alternating use of initialism and an acronym. The once-upon-a-time “American Association of Retired Persons” made a conscious branding effort for the past decade or so to refer to itself using initials rather than its original name and definitely not by pronouncing the goofy word “aarp.” Now, however, a new series of TV commercials uses both initialism and the acronym. Even more confusing, the association is attempting to downplay use of the antiquated “Retired Persons” by creatively inserting “Real Possibilities.”

NAACP is another high-profile organization struggling with its identity, which ironically relies on its familiar abbreviation to obscure the outdated National Association for the Advancement of Colored People in its name. Though the corporate line is that while the name may not be politically correct, it is neither derogatory nor offensive, and does represent the commonly used description when the 100-year-old-plus organization was founded.

Regardless of whether this ill-literate condition occurs intentionally or organically, the reality is abbreviations in all forms are fundamentally counterproductive to an institution’s identity. The goal of branding is to build awareness amongst target audiences – members, policymakers, the public – not disguise it.

The remedy for the plague of abbreviations is to produce names that are distinctive, memorable, meaningful … and immune to lame shorthand. Apple, Amazon, Alibaba, Citigroup, Tesla, Uber, Sprint, Dignity Health, and aging-services groups LeadingAge, Argentum, Brookdale and Eskaton are good examples.