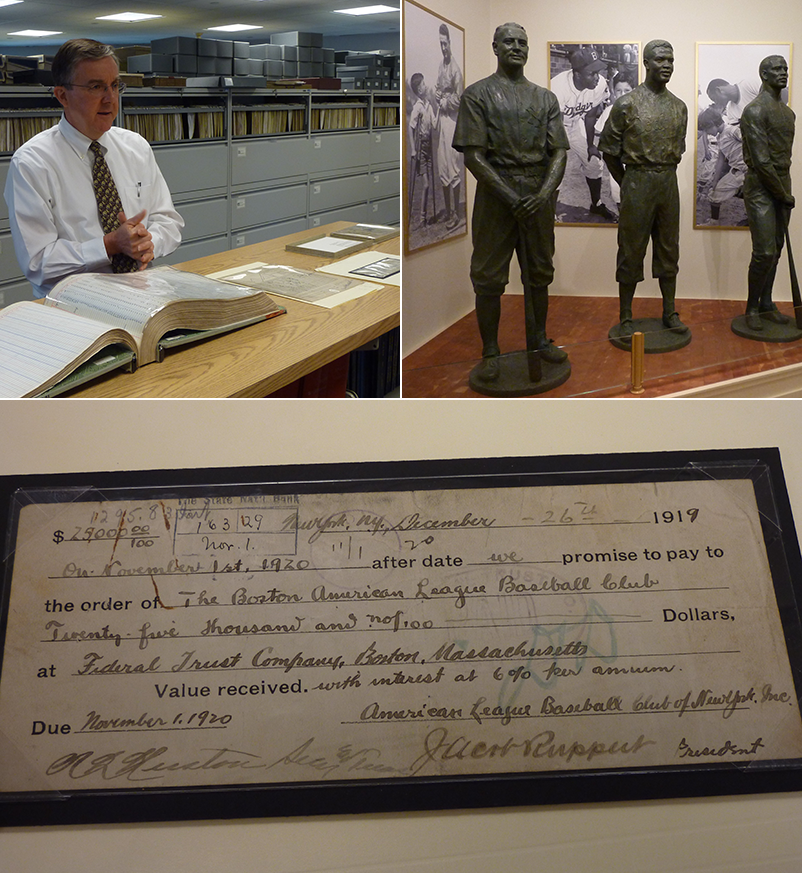 Safe to say, the National Baseball Hall of Fame is the dream destination of everyone who loves the game. A select few individuals are inducted; the rest of us get to visit. The Hall’s physical home is the iconic brick building at 25 Main Street in Cooperstown in upstate New York. Inside, the Museum’s hallowed halls showcase the famous bronze plaques of inductees; alongside dozens of exhibits and artifact displays. More discreetly situated in the lower level, are the brains of the operation, the Library and Research Center.

Within this renowned archive can be found hundreds of thousands of original record books, reports, recordings, photographs, news clips and rarified (white-glove handling only) documents. The role and privilege of Library director James L. Gates, Jr., who has held the position for 21 years, and his staff of researchers is to collect, protect and proudly share this trove of history of America’s pastime.

The following exclusive interview with Gates by Humble Sky lead author Stuart Greenbaum, takes a behind-the-scenes look at his most unique “work” experience.

HUMBLE SKY: What is the best reaction you’ve got when you told someone your job?

JAMES GATES: I have heard many times that I have one of the best jobs in the world, and I would not debate that statement. One of the best comments was from a senior member of the Hall’s staff who told me during my first week in Cooperstown, “You are a baseball fan who got lucky, just like the rest of us.” I have always remembered that remark, mainly because it is true.

HS: What is the most popular piece of “white glove” memorabilia in the library?

GATES: One of the most popular library items is the promissory note for the sale of Babe Ruth from Boston to New York. You can’t go wrong when you tell stories and show artifacts related to “The Curse of the Bambino.” The gold record of Abbott and Costello’s “Who’s on First” is also popular, as is the 1908 Edison cylinder containing the earliest known recording of “Take Me Out to the Ball Game.”

HS: What is your favorite, more obscure, piece in the library?

GATES: We have a significant collection containing the Papers of August Herrmann from 1900 to 1922. He was chair of the ruling commission and basically served as the commissioner of the game before that office was created. There are many boxes of documents included in this archive, and I always think about one rather obscure piece. It is a letter from a baseball league in Hawaii which tells Herrmann that they recently had an issue with a player using a corked bat and asks what they should do. This is well before any rule existed, but shows us how there is nothing new in history.

HS: What is the most unique project with which the library has been involved?

GATES: No two projects are alike. We have been asked to provide assistance to Major League teams conducting research on their own history, assistance to book authors and film producers, etc. I suppose one of my favorite unique projects occurs when we are asked by the player’s alumni association to conduct research on a player’s “roster time” in the major leagues. Pension time is determined not by games played, but by the amount of time one is listed on the team’s roster. This can get pretty complicated as many of these inquiries come from lesser known players who were called up from and sent back to the minor leagues multiple times in a single season. However, if you can find 43 days of major league roster time, they qualify for a minimum pension. It may not be a lot of money, but you feel pretty good when you help an older player find his minimum roster time to qualify for a pension.

HS: Who among your many famous visitors surprised you most with their knowledge of the game?

GATES: I never cease to be amazed at how much baseball knowledge people have. There are a couple of people who stand out. Keith Olbermann has an encyclopedic knowledge of the game, particularly with respect to the early history of baseball cards. He knows as much as anyone I have ever met. The second story revolves around an evening in which I had the honor of joining Bob Feller and Marvin Miller for dinner. The evening’s conversation hit upon many topics, but at one point they were discussing a labor union election in the early 1960s. Not only did Bob Feller know who won the election, but he knew who came in second and why the election results occurred. Mr. Miller remarked that most Americans would not be aware of all this; and that we were all impressed by Feller’s knowledge and recall of non-baseball history. He just looked at us and said, “Well, I do read the papers.”

HS: With your special access to the archives, what is your fantasy “when-time-permits” research project?

GATES: This is a tough one. When there are rare moments of spare time, I am working on an in-house data base meant to track the complete baseball careers of every HOF inductee. This is slow and tedious research, because I am including high school, college, minor league, and international league time as a player, coach, manager, executive, broadcaster, etc. The purpose of this data base is to be able to provide a thorough list of any inductee having spent time in a particular city, state, league, or team. I will probably not finish until I am retired.

HS: Which is more typical: you requesting materials or entities submitting materials to you for the honor/prestige of being in the Hall’s archives?

GATES: I spend about a third of my time dealing with issues related to library acquisitions. I would say that there is an equal amount of time spent responding to donation inquiries as I do contacting potential donors of new library material.

HS: Besides Jackie Robinson and civil rights, what other aspects of baseball history do you think have contributed to, or are metaphors for, changes to American culture?

GATES: Every year I host a three day symposium, the Cooperstown Symposium on Baseball and American Culture, with participants coming from around the United States and Canada. During this event there are dozens of presentations by scholars and historians on how baseball impacts our society and culture. We cover art, music, poetry, literature, civil rights, economic, architecture, etc., everything except baseball on the field. This symposium is now in its 28th consecutive year, and shows no signs of slowing down. There appears to be no end to how baseball can be used to describe our culture and history.

HS: Considering the prominent role of Jackie Robinson in civil rights, are you surprised by the declining interest of Black youth in baseball?

GATES: I don’t think that baseball’s diminishing interest with young African-Americans is due to race. I think there is a general decline of participation in the game with most lower-class or disadvantaged youth, regardless of race. Baseball has become an expensive sport to play. Gloves, bats, and baseballs are not cheap. And, you also need a field on which to play. These issues can be a challenge in many urban areas. Fortunately, Major League Baseball is working diligently to promote the game through the RBI (Reviving Baseball in the Inner City) Program. This program strives to provide urban youth with the equipment and coaching needed to learn how to play the game. All of the Major League teams work to support this effort and I think it is helping to revive an interest in the game, along with the passion that can stay with you forever.

HS: Humility is not an attribute readily associated with professional athletes; who is the most humble ballplayer you’ve met in your time with the HOF?

GATES: You have to possess a certain level of self-confidence to play Major League Baseball; and to make it to the Hall of Fame, you have to truly believe in the level of your skill set.  In addition to this self-confidence, one continuum I have seen in every Hall of Famer is that they also understand that no matter how much skill they have, they also have to work hard every day to get the most out of their natural talent. There are no lazy ballplayers in the Hall of Fame. They have all worked extremely hard to make it to Cooperstown, and they know that their colleagues have also worked very hard to get here. Despite all this, many of these inductees are truly humble about themselves and give others (parents, coaches, scouts, etc.) credit for helping them get to the peak of their skills. I believe it was Phil Niekro who said it best in his induction speech, “When you see a turtle sitting on a fence post, you know he didn’t get there by himself.”

* Check in photo related to the New York Yankees purchase of Babe Ruth from the Boston Red Sox.