THESE BAD SIGNS MISS THE POINT

Did you notice these new signs? What kind of message are they sending? Not good. Arguably, they’re thoughtless or worse, plain bad.

They pretend to promote something positive. But, instead do the opposite. The lawn sign displayed in the front yard of a recently remodeled mansion is supposed to ward off would-be burglars. The freeway billboard is supposed to discourage would-be texters.

Unfortunately, both signs not only miss their marks, they insinuate unintended consequences.

BURGLE THIS. The “Liberty Bell Alarm & Home Theater” sign may deter some burglars. Yet others are sure to be enticed by the as-advertised custom electronics available inside. The sign reads like a challenge, bragging about the potential bounty. The homeowners might as well say “I dare you.” It is dumb.

LOOK. DON’T LOOK. The billboard delivers a life-saving warning: don’t text while driving. Because, obviously, it is unsafe to take your eyes off the road. Ever. No matter how important or clever the message may be (i.e. “GET OVER YOUR SELFIE. SEND IT LATER.”); and no matter who it’s from (i.e. “STOPTEXTSSTOPWRECKS.ORG” and the four sponsors identified by their respective logotypes). That is a lot of stuff to read as you look to your left across the lanes of oncoming traffic as you zoom by at 65 mph. To say the sign defeats its purpose is an understatement. It is dangerous.

Another bad sign, unapologetically on display here, is when you get to the age you feel compelled to point out every single thing you deem to be dumb or dangerous. 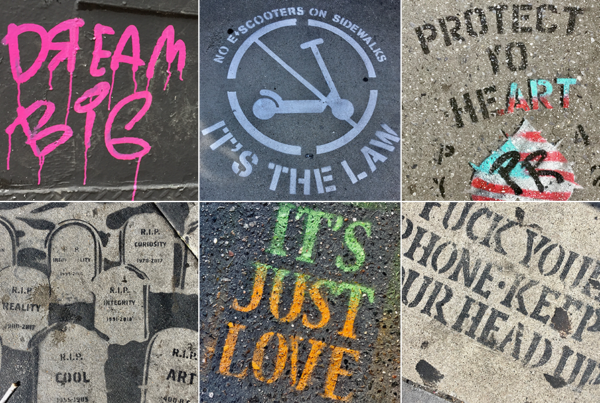