HE QUIETLY INVENTED THE INFORMATION AGE 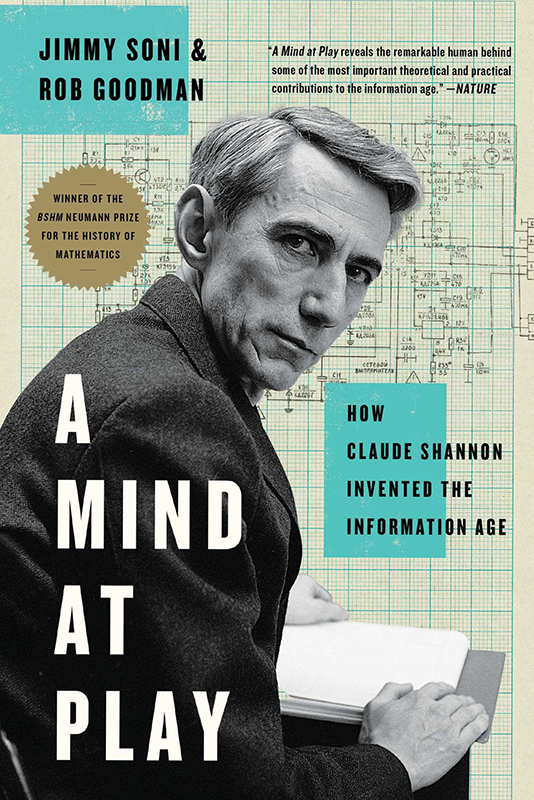 He invented the computerized dissemination of information. Claude Shannon is considered a genius among the ranks of Einstein, Newton, Bertrand Russell and Steve Jobs. But unlike most master inventors, Shannon was a humble introvert. He was more comfortable retreating — tinkering, juggling, riding his custom unicycles and building a rocket-powered Frisbee — than promoting his work.

Shannon’s legendary paper from 1948, “A Mathematical Theory of Communication,” proposed that data should be measured in bits (a contraction of the phrase “binary digit) or discreet values of zero or one, which introduced the notion that information could be measured and quantified.

In the information age, it was Shannon (1916 – 2001) “whose fingerprints are on every electronic device we own, every computer screen we gaze into, every means of digital communication,” Siobhan Roberts effused in The New Yorker profile “Claude Shannon, the Father of the Information Age, Turns 1100100.”

The new book A Mind at Play by Jimmy Soni and Rob Goodman (Simon & Schuster, 2017) chronicles his brilliant, playful legacy. “Claude Shannon was self-effacing … Rarely has a thinker who devoted his life to the study of communication been so uncommunicative,” the authors noted. A reclusive scientist, overshadowed in history defined by self-promoters, he was content in his own world, in a “life spent in pursuit of curious, serious play.”

It is unlikely anyone thinks of Claude Shannon when they turn on their computer, load a webpage, send an email or tweet, post to Facebook or stream a video. This oversight is what makes him so phenomenal. He was a humble genius whose actions alone communicated volumes, who applied his intellect equally to work and play.